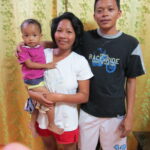 Althea is 2 years old, female, born to Mrs. Loida and Jovan Felizarta on December 26, 2012. They live in Brgy. Salvacion Silago Southern, Leyte (almost 6 hours from Tacloban in the Philippines). Her father is a farmer and her mother is a housewife.

In 2014, their baby was admitted in Southern Leyte. They were referred to Dr. Redona and Althea was diagnosed having Patent Ductus Arteriosus. Since, they couldn’t afford paying for the operation , they appealed to any government organizations but got no help. In the Philippines, it costs 250,000 Php (c£3,700) for the operation. They asked for God’s help and shortly thereafter were introduced to Dr. Abi Estelle who was working in the Philippines at that time. Willing and Abel were able to help them with the operation and the logistics of getting to the hospital.

Althea’s parents later said ”All the laboratories and vaccines were provided. The accomodation and food were paid for by Willing and Abel. We are so thankful. When our baby went to the hospital, she couldn’t walk by herself, only staying in one corner. She couldn’t talk or mingle with others. But after the operation, she was playing with toys given to the children and was roaming around the house in Cebu. Thank you Willing and Abel.”

Share on TwitterShare on FacebookShare on PinterestShare on LinkedInShare on E-mailShare on RedditShare on WhatsApp
Posted in Latest News, The Children
← Freidelyn Morallos (aged 10yrs) from the PhilippinesSantigi from Sierra Leone →

This site uses cookies to ensure we give you the best experience. By continuing to browse the site you are agreeing to our use of cookies. Find out more